After a great month in Maine we are now heading south. During our stay the weather has been very cooperative neither too hot nor too cold, the humidity has been quite acceptable and there hasn’t been a great deal of rain. Mercifully, the mosquitos and black flies have been largely absent. All-in-all excellent environmental conditions.

We have visited with relatives and old friends including my brother Jordan and his wife Debbie, Helen Nyer, Steven Nyer, and Sam Silverman and has beautiful family. We visited Anita Zeno in Camden, the Balsams in Falmouth, Adam Russell in Belfast, Carol and Ralph Graves in Sargentville, and Jack Brookings and Dean Stern in Bangor. We also made some new friends including the Stuckey family from Brunswick.

Two days ago we stayed in the Town of York Harbor. Since York is at the southern end of Maine and we considered anything south of Augusta to be virtually another state, I did not know a great deal about this city when I grew up in Bangor. Here is what I learned when visiting York:

York was settled by Europeans in 1624 and was originally called Agamenticus, the Abenaki term for the York River. In 1638, settlers changed the name to Bristol after Bristol, England, from which they had immigrated. Envisioning a great city arising from the wilderness, Sir Ferdinando Gorges, lord proprietor of Maine under the Plymouth patent, named the capital of his province Gorgeana. In 1642, by charter of King Charles I, Gorgeana became the first incorporated city in America.

Following Gorges’ death, the Massachusetts Bay Company claimed his dominion. In 1652, York, Massachusetts, was incorporated from a portion of Gorgeana, making it the second oldest town in Maine after Kittery, incorporated two years earlier. It was named for York, England. But control of the region was contested between New England and New France, which incited Native Americans to attack English settlements throughout the French and Indian Wars.

During King William’s War, York was destroyed in the Candlemas Massacre of 1692. During the raid by the natives about 50 inhabitants were slain and near 100 carried away captive.The final local Indian attack occurred at the Cape Neddick area during Dummer’s War in 1723. Hostilities diminished with the French defeat at the Siege of Louisbourg (1745), and ceased altogether with the 1763 Treaty of Paris.
As provincial capital and site of the Royal Gaol (Jail), York prospered. 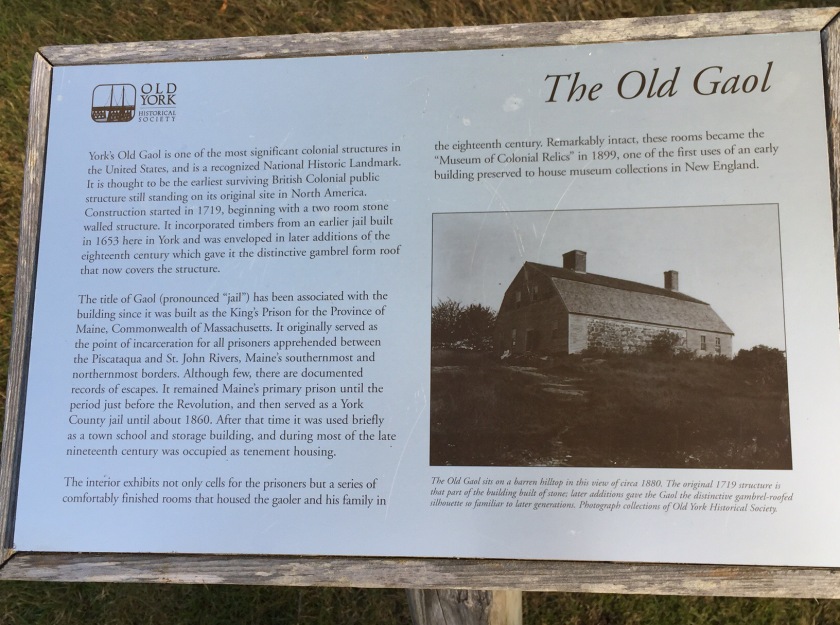 Numerous wharves and warehouses serviced trade with the West Indies. Agricultural products and lumber were shipped in exchange for sugar, molasses and other commodities. One notable merchant was John Hancock, whose establishment is now a museum. Following the Revolution, however, President Thomas Jefferson’s Embargo Act of 1807 crippled trade. York, bereft of status as capitol, would not again be prosperous until after the Civil War.
Like Bar Harbor and Newport, Rhode Island, York became a fashionable summer resort, and retains many distinctive examples of Gilded Age architecture, particularly in the Shingle Style. We explored a cluster of historic buildings in the center of York Village which are maintained as museums by their Historical Society.

York Harbor itself had a ferocious current and we rocked and rolled much of the night.

When we revisited Portsmouth we were on a mission to order a new mattress. Mission accomplished and we plan to pick it up the new mattress when we get to Norfolk, VA. I would have loved to spend more time in Portsmouth as it is a lovely old town. During our bicycle exploration we saw many homes from the 1600’s and early 1700’s. The Portsmouth Yacht Club is located in New Castle which was founded in 1623! Quite beautiful! We said goodbye to our friends the Balsams in Portsmouth and went out to a delicious dinner with our new friends the Stuckeys.

Tonight we are back to the beautiful Eastern Point Yacht club north of Boston.

This is a text widget. The Text Widget allows you to add text or HTML to your sidebar. You can use a text widget to display text, links, images, HTML, or a combination of these. Edit them in the Widget section of the Customizer.
%d bloggers like this: